How service dogs safeguard, deepen relationships, and save us from ourselves

I am sharing parts of an article I read By Shauna Springer, CNN. After you have enjoyed some of the info on Service Dogs, go to the part of the article I have written and see how you can apply for a Service Dog or an Emotional Support Animal.

There are links for both at the bottom of this page! 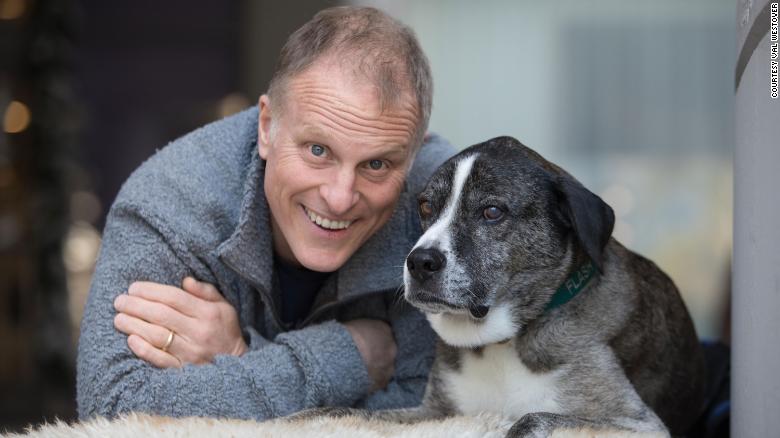 Leadership coach John Bates has a rare condition called Stevens-Johnson syndrome. Thanks to his service dog, Flash, he is able to travel internationally for speaking engagements.

Leadership coach John Bates was speaking at a TED conference in front of a huge audience when his dog Flash walked across the stage, sniffed him, and repeatedly started poking him with his nose.

Flash was doing what is called “alerting” in the world of working service dogs, telling Bates that he might not be OK. After his talk, Bates went back to his room, took some meds, and went to sleep, avoiding a potential medical emergency.

“A dog’s sense of smell is about 10,000 times better than a human’s sense of smell,” said Mary Cortani, a CNN Hero and founder and executive director of Operation Freedom Paws, which provides service dogs to veterans and people with disabilities.

“A service dog can smell differences in our chemistry when we’re stressed or sick. That’s how they can track a person who is lost in the woods. From miles away, they can smell fear or distress.”

Trained service dogs can be life-changing, and even lifesaving for the humans they serve by safeguarding them, Cortani said, helping their people develop deeper human connections — and even saving them from themselves.

Service dogs keep their humans out of the ER

Bates, who is founder and CEO of Executive Speaking Success, often has to travel internationally to speak in public. He has a rare condition called Stevens-Johnson syndrome. It can be triggered by stress, time zone changes, and disrupted sleep cycles.”It’s not pretty,” Bates said. “It starts with lesions in your mucous membrane, progresses to your skin falling off in large chunks, and can lead you to go blind and die in a burn unit.”

He’s had to visit hospital emergency rooms a couple of times during the early phases of a potentially dangerous medical crisis. Protecting Bates since 2009, Flash alerts him whenever he senses his stress rise to an unhealthy level. Because of Flash’s protection, Bates has gained “massive freedom of action” and has been spared any further trips to the ER.

Trained dogs can assist with PTSD

Exposure to trauma can put people into a state of what’s called “chronic threat response,” which means that their fight-or-flight system is continually activated and they filter the world through the lens of potential threats.

Because of their dog’s “sixth sense” for danger, an owner suffering from post-traumatic stress disorder is often able to relax if their dog is relaxed.”Service dogs can literally ‘clear a room’ by entering it, turning on lights, and giving their owners confidence that there are no intruders,” said Andrea McCarren, vice president, and chief content officer of PenFed Digital, who raises service dogs for veterans and first responders through America’s VetDogs and Canine Companions for Independence. Veterans tell McCarren that their service dogs give them greater comfort being in public because “it is their dog and not their disability that is the center of attention.” 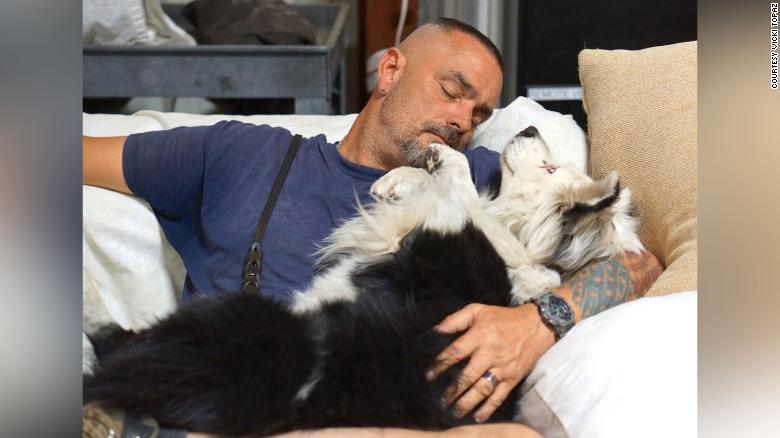 US Navy vet Dave Jennelle, shown with his service dog, Laddie, is now head mentor trainer at Operation Freedom Paws. When US Navy veteran Dave Jennelle came to Operation Freedom Paws, he was guarded. He wanted what he thought would be an intimidating dog, the kind that makes people stay back — a Rottweiler, Doberman pinscher, or a pit bull. That was not to be, according to Cortani, who is widely known to be a “dog whisperer.” “I don’t give people the dogs they want,” Cortani said. “I give them the dogs they need.”Jennelle, now the organization’s head mentor trainer, received a white ball of fluff named Laddie instead. Laddie, a border collie mix, is a magnet for positive attention, which was uncomfortable for Jenelle at first. Now, “I wouldn’t trade Laddie for the world,” he said. 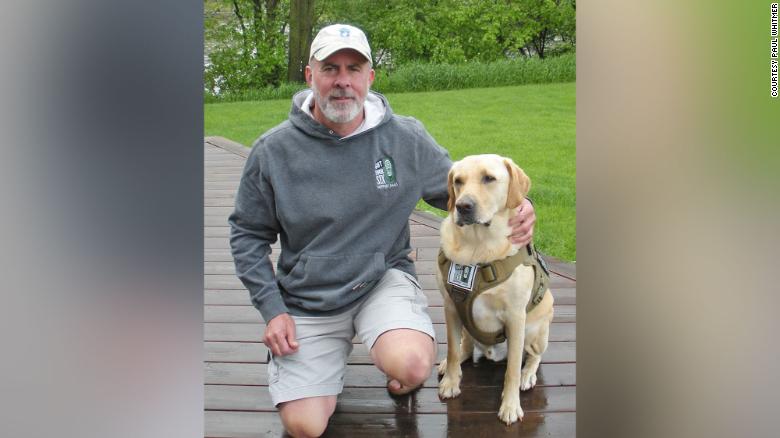 US Army vet Paul Whitmer, shown with his dog, Paul, now looks forward to going out in public. When US Army veteran Paul Whitmer started working with his service dog from Got Your Six Support Dogs, he had severe anxiety, especially when interacting with strangers. Working through this issue with his dog by his side greatly has decreased his anxiety and hypervigilance symptoms. After three years, Whitmer said he enjoys many positive interactions with strangers and looks forward to going out in public. Whitmer feels his capacity for empathy has grown in direct proportion to his work with his service dog, also named Paul.” I’m now able to feel what others are feeling and respond accordingly,” he said.

Service dogs may even save us from ourselves

Whitmer said his dog probably saved his life. “Had Paul not been awarded to me — I’m not 100% sure I’d be around today. I was circling the drain, and now there’s a stopper in it, and the basin is filling back up again. It’s truly amazing.”

Trained service dogs are working dogs, who are motivated to bond and attend to one person. They can be trained to do nearly 50 tasks, including retrieving items, opening doors, clearing rooms, and mitigating the symptoms of trauma. It’s important to remember that the rules of engagement for service dogs are different from family pets. Here’s how to interact with them.

Look for a vest: It likely says, “working dog — do not pet.” Service dogs will often be wearing an official vest or halter.

Ask permission before you touch or engage a service dog: You can say, “May I visit with your dog?” If the owner says no, do not take this personally. It is impossible to know the nature of their challenges or the rationale for requesting space. 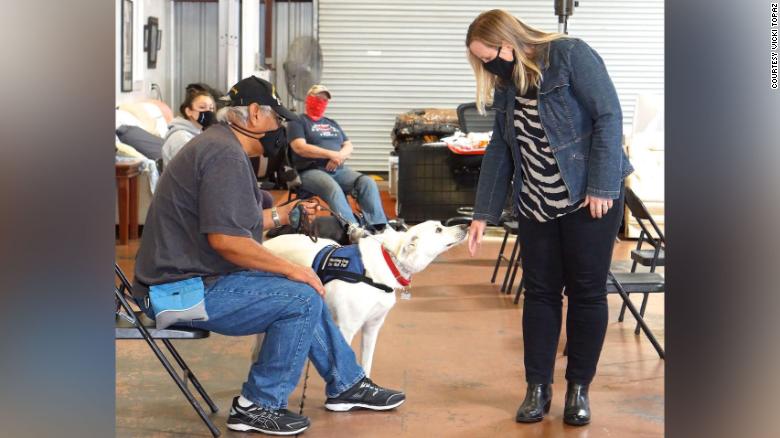 Author Shauna Springer gently extends the back of her hand as she visits with a service dog at Operation Freedom Paws.

How to pet the dog: If the owner is agreeable, stand at a 90-degree angle from the dog and extend the back of your hand. The dog will usually sniff your feet first and travel up your leg to your hand. Stroke the dog under the chin and slowly come up around the ears, rather than coming straight down over the head, which can be perceived as threatening behavior to a dog.

Stay chill: Exhibit a calm, open demeanor throughout the interaction. If you do, you may be part of a healing journey, although you may never know it.

I just think it is amazing that dogs and people can work together and accomplish these amazing things! Service Dogs are trained to perform from the time they are born by people who are trained to train them. They are very special and some of the coolest dogs on the planet!

If you have a disability or need assistance from a Service Dog there are so many services out there. One of the most popular I have found is Little Angels Service Dogs. You can click the link and go to their site to apply for a Service Dog. They will then contact you for an interview to determine if you will be awarded a Service Dog.

In the event, you do not require a dog that has been developed to be qualified as a Service Dog but it feels you could at least use some emotional support. There is another alternative. You can easily qualify for an Emotional Support Animal. This could be a dog that you already have who is your companion and already gives you the support you need.

To register your dog as an ESA you can click here or read this article I have written about How To Get An ESA Letter.

For All The Coolest Dogs On The Planet!

I certainly hope this helps!